The third type of photophosphorylation to produce ATP is found only in cells that photosynthesize. This process is similar to oxidative phosphorylation in several respects. A major difference is the ultimate source of energy for ATP synthesis. In oxidative phosphorylation, energy comes from electrons produced by the oxidation of biological molecules. In photosynthesis, energy comes from sunlight. Photons from the sun interact with chlorophyll molecules in the reaction centres of chloroplasts of plants or membranes of photosynthetic bacteria.

Some of the differences include:

The answer is the energy captured from photons from the sun, which raises the electrons to the energy where they move “downhill” to their destination NADPH in a Z-shaped pattern. The movement of electrons through this scheme in plants requires photon energy at two places to “raise” the electron energy high enough. Finally, it should be noted that photosynthesis actually has two phases, called the light cycle (described above) and the dark cycle, which is a set of chemical reactions that capture CO2 from the atmosphere and “fix” it finally to glucose.

Photosynthesis is an energy capture process found in plants and other organisms to harvest light energy and convert it into chemical energy. This photochemical energy is ultimately stored in carbohydrates that are made using ATP (from energy harvesting), carbon dioxide, and water. In most cases, a byproduct of the process is oxygen, which is released from the water in the capture process. Photosynthesis is responsible for most of the oxygen in the atmosphere and supplies the organic materials and most of the energy used by life on Earth.

The steps in the photosynthesis process vary slightly between organisms. In an overview, it always starts with the capture of light energy by protein complexes, which contain chlorophyll pigments, called reaction centres. Plants sequester these proteins in their chloroplasts, but bacteria, which have no organelles, embed them in their plasma membranes.

Light energy is used to remove electrons from electron donors (usually water) and leave behind a byproduct (oxygen, if water was used). Electrons are donated to a carrier and ultimately accepted by NADP+, to become NADPH. As the electrons travel toward NADP+, they generate a proton gradient across the thylakoid membrane, which is used to drive ATP synthesis. Therefore, NADPH, ATP, and oxygen are the products of the first phase of photosynthesis called light reactions. The energy from ATP and the electrons from NADPH are used to reduce CO2 and generate sugars, which are the final storage of energy that arises directly from photosynthesis.

Chloroplasts are found in almost all aerial plant cells, but they are mainly concentrated in the leaves. The interior of a leaf, below the epidermis, is made up of a photosynthetic tissue called a mesophyll, which can contain up to 800,000 chloroplasts per square millimetre. 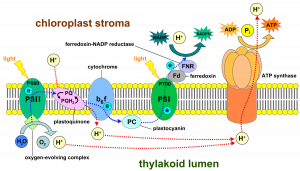 In addition to chlorophylls, carotenoids and xanthophylls are also present, allowing absorption of light energy over a broader range. The same pigments are used by green algae and land plants. Brown algae and diatoms add fucoxanthin (a xanthophyll), and red algae add phycoerythrin to the mix. In plants and algae, pigments are held in highly organized complexes called antenna proteins that help channel energy, through resonance energy transfer, to the reaction centre chlorophylls. Such an organized system is called a light-harvesting complex. The electron transport complexes of photosynthesis are also found in the thylakoid membranes.

In chloroplasts, the light reactions of photosynthesis involving electron transfer occur in the thylakoid membranes. The separate biochemical reactions involving the assimilation of carbon dioxide to produce glucose are known as the Calvin cycle, also known as “dark reactions”. Chloroplasts are where light energy is captured, electrons are extracted from water, oxygen is released, electron transport occurs, NADPH is formed, and ATP is generated. The thylakoid membrane corresponds to the inner membrane of the mitochondria for electron transport and proton pumping.

The thylakoid membrane works its magic using four main protein complexes. These include photosystem II (PS II), the cytochrome b6f complex (Cb6f), photosystem I (PS I), and ATP synthase. The functions of these complexes, respectively, are to capture light energy, create a proton gradient from the movement of electrons, capture light energy (again), and use the energy of the proton gradient from the overall process to synthesize ATP.

The harvesting of light energy begins in PS II with the absorption of a photon of light in a reaction centre. PS II performs this task best with light at a wavelength of 680 nm and readily loses an electron to excitation when this occurs, leaving PS II with a positive charge. This electron must be replaced. The ultimate source of electron replacement is water, but water must lose four electrons, and PS II can only accept one at a time.

An intermediate oxygen evolution complex (OEC) contains four manganese centres that provide the immediate replacement electron that PSII requires. After the OEC has donated four electrons to PS II, the OEC extracts four electrons from two water molecules, releasing oxygen and discharging four protons into the thylakoid space, thus contributing to the proton gradient. The excited electron from PS II must pass to another carrier very quickly, lest it returns to its original state. It does this by donating its electron within picoseconds to pheophytin.

Pheophytin passes the electron to protein-bound plastoquinones. The first is known as PQA. PQA gives up the electron to a second plastoquinone (PQB), which waits for a second electron and collects two protons to become PQH2, also known as plastoquinol. PQH2 passes them to the Cytochrome b6f (Cb6f) complex which uses the passage of electrons through it to pump protons into the thylakoid space. ATP synthase produces ATP from the proton gradient created in this way. Cb6f drops the electron onto plastocyanin, which retains it until the next excitation process begins with the absorption of another photon of light at 700 nm by PS I.

Light absorption in PS I

Note that the reduction of NADP+ to NADPH requires two electrons and one proton, so the four electrons and two protons from the oxidation of water will result in the production of two NADPH molecules. At this point, the light cycle is complete: the water has been oxidized, ATP has been created, and NADPH has been produced. Electrons have passed from water to NADPH via carriers in the thylakoid membrane, and their movement has released enough energy to produce ATP. The energy for the entire process came from four photons of light.

The two photosystems that perform all this magic are protein complexes that are similar in structure and means of operation. They absorb photons with high efficiency, so that each time a pigment in the photosynthetic reaction centre absorbs a photon, an electron from the pigment is excited and transferred to another molecule almost instantly. This reaction is called photoinduced charge separation and is a unique means of transforming light energy into chemical forms.

In addition to the path described above for electron movement through PS I, plants have an alternate route that electrons can take. Instead of electrons going through ferredoxin to form NADPH, they take a reverse path through the proton-pumping b6f complex. This system, called cyclic photophosphorylation, which generates more ATP and no NADPH, is similar to a system found in green sulfur bacteria. The ability of plants to switch between noncyclic and cyclic photosystems allows them to generate the proper ratio of ATP and NADPH that they need for carbon assimilation in the dark phase of photosynthesis. This ratio turns out to be 3 ATP to 2 NADPH.

The output of the photophosphorylation part of photosynthesis (O2, NADPH, and ATP), of course, is not the end of the photosynthesis process. For the growing plant, NADPH and ATP are used to capture carbon dioxide from the atmosphere and convert it (ultimately) to glucose and other important carbon compounds. This, as noted above, occurs in the Calvin Cycle in what is called the dark phase of the process. The oxygen released in the process is necessary for the respiration of all forms of aerobic life on Earth. In fact, essentially all of the oxygen in today’s atmosphere is thought to be the result of the splitting of water in photosynthesis over the many aeons that the process has existed.